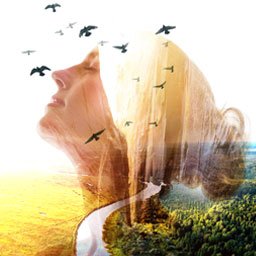 In 2000 I had a Near Death Experience NDE and a stroke  that literally changed my entire life. When I was up at the pearly gates all I could think of was “I have things to do” and then bang - like a sound of thunder and lightning I came back in my body and experienced a small stroke with the sensation shooting down my right side of my body.  I knew I had to fulfil my lifelong dream to become a naturopath and herbalist – little did I know that the spiritual side to healing just became so prominent in my life it was such a transformational time and life changing to say the least.

So 3 months after this NDE and stroke, I enrolled in Uni to complete and upgrade my leaving results doing Chemistry to get into Occupational Therapy – this was pretty challenging as I was also experiencing massive chronic fatigue and migraines but I pushed on and got thru only to realise that I didn’t want to move from my home base and decided to learn Remedial Massage instead which ended up to be the best choice for me at this time and on a Soul Level.

At the end of 2000, Tibetan Buddhism became the first spiritual practice that came into my life and I practiced many of the teachings for 4 years and also studying to become a Remedial Massage therapist - Energy Medicine Healer and Aromatherapist.

In 2004 Theta Healing came into my life. I studied this for 4 years doing many of the practices and teachings and also taught for a short while - I totally love this technique it is so inspiring and life changing to say the least.

In 2008 I became further interested in increasing my understanding of how to release contracts etc from a much higher level and also to learn my Galactic Heritage and understanding moving forward. I was searching info on Parallel Lives and came across a school called Spiritual SChool of Ascension (SSOA).This school was run by an amazing healer by the name of Karen DAnrich. Karen was going by the name of 'Mila' and her partner, Thomas Weber 'OA' and they lived in Kuwaii for many years. Karen, Aka 'Mila' was an Ascension Master in Lemuria and was able to express amazing channellings and teachings that really opened me up to my Galactic Centre and StarSeed heritage on many levels. Karen later became 'Lilliya' and created another school after OA passed called Light Wave Synergy - all of her teachings are available and I pray in the future that I will be able to share her teachings to continue her legacy. The information that unfolded from my connection with Karen Danrich are also vibrated and expressed thru my sessions and healings. She will always be in my heart and often she comes to me to visit as she did when she passed so I have a wonderful connection with her.

Previously in 1999 I completed the first level training for Kinesiology which gave me a really good understanding of how this would work with Theta Healing to test for beliefs etc.

In 2001, I complete the first level training for Reiki but now use my own innate Galactic and Shamanic connection when doing healings and readings.

In 2008 I finally started my studies in Naturopathy, Herbalism & Nutrition and completed this in 2015.